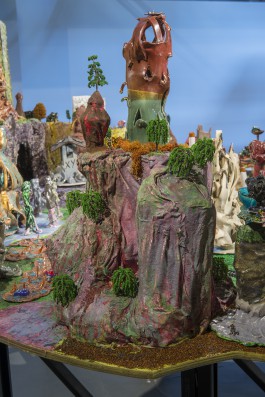 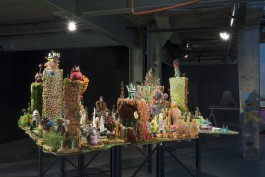 Catalogue Essay
Text by Vanessa Berry
In two thousand years' time the world will be a dangerous place. People will live in rough villages alongside ruins and the craters from atomic bomb blasts. The ancient world of the twentieth century will exist only in traces, rubble and debris and a distorted mythology.

This is the setting for the science fiction novel Riddley Walker, a regressed, post apocalyptic world that is simultaneously future, past and present. The book's odd language, words stretched and misshapen, catch on the eyes like thorns. At the start of the book the adolescent Riddley kills a wild boar as it makes a charge at him:

Him on 1 end of the spear kicking his life out and me on the other end watching him dy. I said, 'Your tern now my tern later'.

Like the world of Riddley Walker, the dense, oozing details in Emily Hunt's paintings, etchings and ceramics have their own language. The elliptical twists of infinity signs. Eyes and tongues. Weapons and sceptres. The closer you get to them the more the details seem to writhe in a contest for space and attention, twisting up against each other.

The narrative of Riddley Walker includes vestiges of the late 20th century world the reader is familiar with, but always skewed or mutated somehow. This mutation calls our contemporary reality into question. The world of the Doctrine of Eternal Recurrence model triggers a similar process of askew recognition. A miniature train runs through an allusive landscape. The engine is painted with slogans as if it has fallen into the hands of the Merry Pranksters from The Electric Kool Aid Acid Test. It passes through the glazed head of a ceramic ogre like a Bomarzo monster and around a series of sickly red pools, in which tiny figures are trapped like flies. 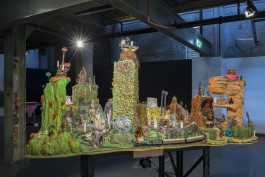 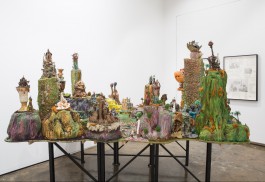 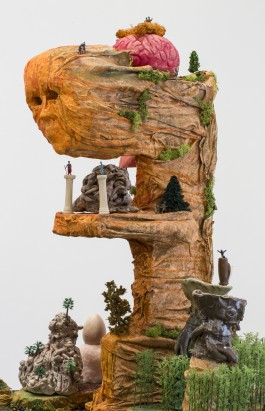 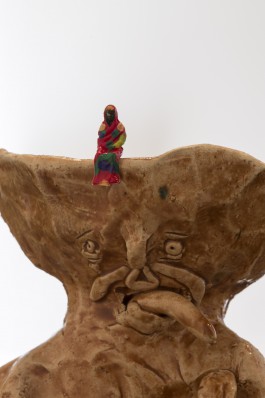 Emily Hunt's work across all mediums has a seductively detailed aesthetic, drawing the viewer into scenes that often shock with their depictions of violence and vice. This dual sense of seduction and surprise derives in part from Hunt's fascination with German Renaissance print-making. As these artists and satirists working in the 16th century did for their time, Hunt uses grotesque images of violence and hedonism to critique contemporary morality.

The towers and mountains and follies of Doctrine of Eternal Recurrence at first appear to be a fairy-tale island in a toxic palette of acid green and orange. Up close its violence is revealed. It's a world equally beautiful and savage. A tiny bound figure is stranded atop a hill with no escape. Another holds a club, a pile of liver-red flesh at his feet. What at first seems an escape into fantasy includes scenes of horror which trigger an uncomfortable sense of familiarity. Scenes come to mind, not from a fictional world, but from the one we inhabit. These are the global, political realities of war, torture and persecution, as well as the smaller brutalities that underlie everyday human relations.

Hunt works within the history of the grotesque, employing a visceral, ribald aesthetic. Her practice can also be understood in a tradition of storytelling. The entanglement of historical, ideological and individual narratives is suggested by the complexity of detail. In Reification and Objectification, pencil drawings of ornate beds and chairs are interspersed with etchings depicting scenes of torture and gluttony. The light touch of the pencil marks contrast to the more deeply bitten process of the etchings. Ornament and torture are equally human creations.

The journey into detail and violence is repeated across Emily Hunt's work in Doctrine of Eternal Recurrence. Delight at vitality is undercut by a recognition of viciousness. Across the Gorgon series the colours roil, their gemstone gleam, their bright colours of poison and rot. The gorgon faces are filled with a dense, regurgitative combination of objects and motifs: goblets, crocodile skin, intestines, chairs, cigarettes, hearts, demons. Faces appear inside other faces, caught in a weird mitosis. Eye and hand motifs reappear as symbols of potential and human agency. The eye is insight or voyeurism, the hand creativity or torture.

In Reification a severed hand lies on top of an executioner's block, the fingers drooling over the edge. The hand is easy to miss among the grisly narrative of the scene, the saint tied down as the executioner swings his scythe, watched by a collection of festering onlookers. This severed hand upon the block is not wholly lifeless, however. An eye watches from its palm with a sly energy, a reminder of recurrence. My turn now, your turn later.

Vanessa Berry is the author of MirrorSydney and two memoirs. 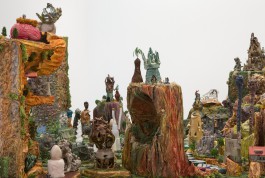 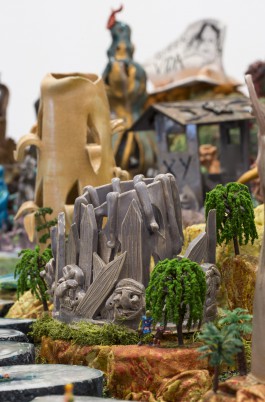 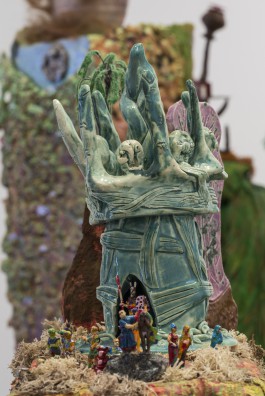 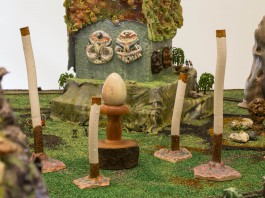 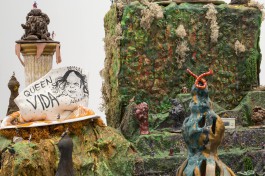 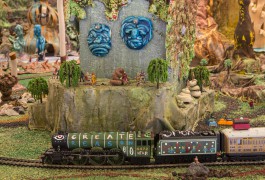 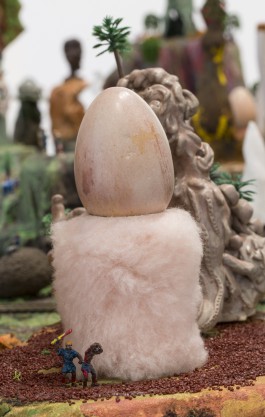 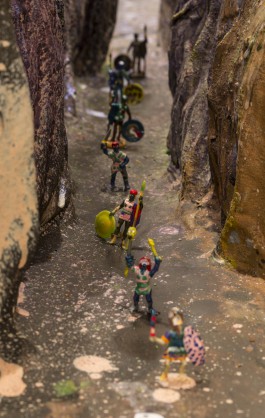 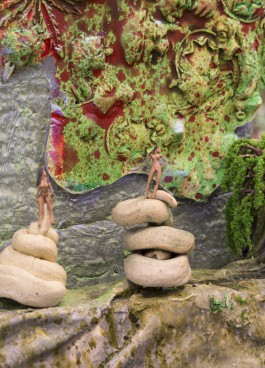 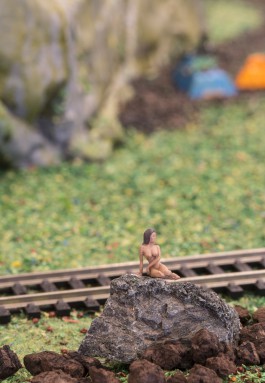 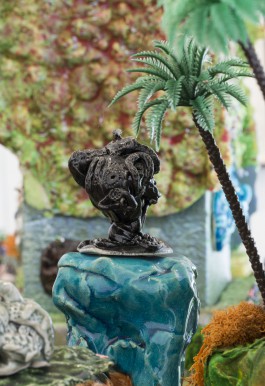 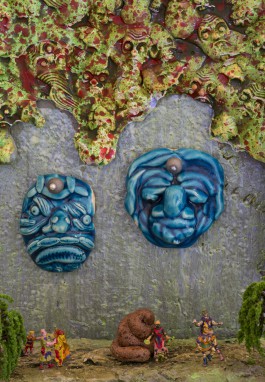