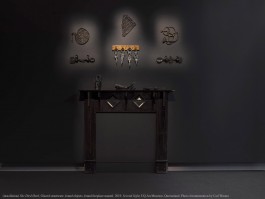 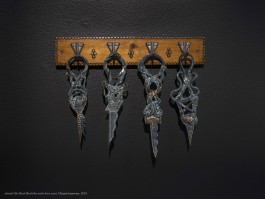 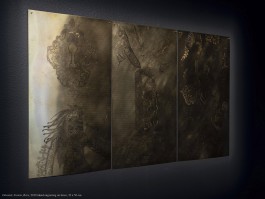 Emily Hunt’s artworks disrupt historical witch iconography that typifies the grotesque: wicked crones (‘aged’ women), fecund ornaments and inventive embellishment. Hunt recognises that the perception of witches, from the Renaissance (1300–1600) to the present, has been led by male artists and inextricably tied to a fear of feminine sexuality.
Second Sight: Witchcraft, Ritual, Power. March 1 — June 29, 2019

This project was assisted by a grant from Create NSW, an agency of the New South Wales Government. The NSW Artists' Grant is administered by the National Association for the Visual Arts (NAVA). 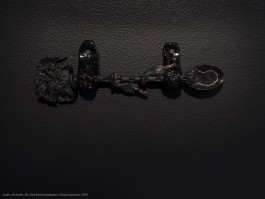 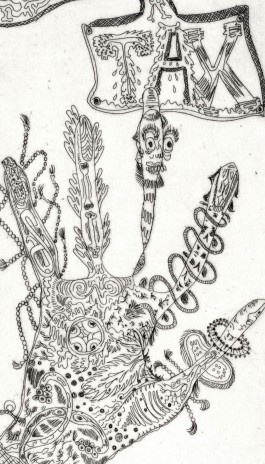 In this exhibition Hunt demonstrates her ability to re-claim mythologised characters by working with diverse mediums of etching and ceramics, casting them anew in a contemporary frame. Her monotypes and etching plates visually recall works by celebrated male Renaissance ‘masters,’ particularly Albrecht Dürer. Hunt harnesses and disrupts their canonised depictions of the witch. 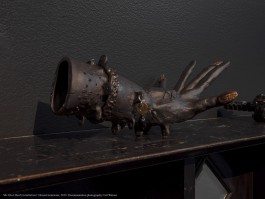 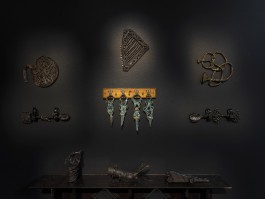 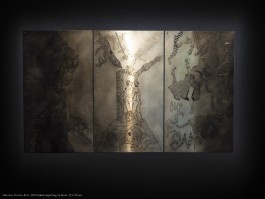 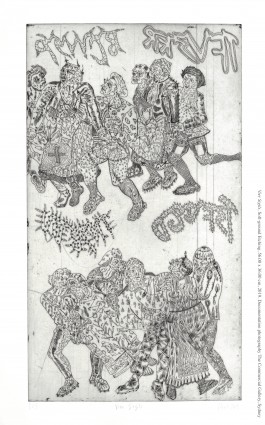 16th century Renaissance prints were always created by male artists. My work recasts Renaissance prints by focusing on the role of the female gaze and female creator. In the 16th and 17th centuries, print culture imagined witches as a tangible threat to society. Innovative print culture in Europe during the 16th century circulated and disseminated ideas, values, (fake news I dare say) leaving a profound effect on the culture. 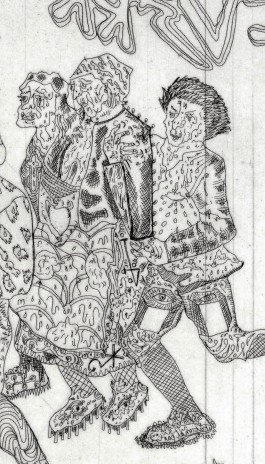 My work contains personal translations, much like the way I speak and write. This etching contains two crowds, pulling witches to their deaths. The irrational being forced to be rational. This is often how I react when I am corrected. The etching is drawn from two drawings of the Dancing Plague, a recurring theme in my work. (Dancing mania on a pilgrimage to the church at Sint-Jans-Molenbeek, 1642 Hendrick Hondius after 1564 drawing by Pieter Brueghel the Elder)

My etchings and paintings are receptacles for pattern, figure and representations of uncontrolled fertility – but this is an abnormal growth. Portraiture is produced in an attempt to discharge, release or liberate my daily response to the actions of humankind.

Sigils are an intrinsic concept of Chaos Magic. It is the creation of a personal symbol that embodies magical power. Creating a sigil is an act of practising magic, which shares the same degree of risk as making an artwork. The act is to write something personal, a sentence, a statement that you desire to be true – like, ok  “One day I will exhibit at The Stedelijk Museum”, then wrap the consonants together into an image on a piece of paper. To empower the spell and set it in motion you must either burn the paper, or have an orgasm – thinking of the object of your desire at climax.

The Sigils I inscribed on the copper are about diversity, nature and The Emergency. 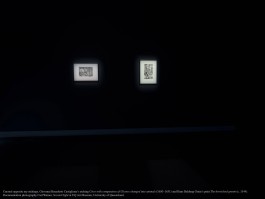 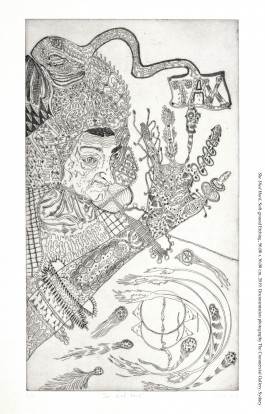 The body of this etching draws from the figure of Dürer’s Mother. (Portrait of the Artist's Mother at the Age of 63, 1514) He drew his mother a few days before she died, grieving later, “Also she died hard, and I marked that she saw something dreadful..”

I wanted to bring her back alive in a sense, to recast her as the powerful crone she was, invoke her as a tool for change.

Here, Barbara Dürer holds her hand up, demanding Tax from the Beast.

An archetypal character that often surfaces in my work is that of the Crone, the old woman, “the hag”. The crone is no longer a mother, the image of her can now be seen as a re-invented widow. In this woman image, each accessory becomes an agent of the woman’s self-possession. She collects a familiars or avatars around her. I am thinking of a vision of my Aunty Anne. Her rings, nails, hair, and her non-apologetic attitude towards society. I’m interested in the secretive power of body accessorisation. The power of the witch to animate objects. Not to mobilise them but rather to give them spirit/soul, which is blasphemous (contrary to the patriarchal model of life from Divinity.) 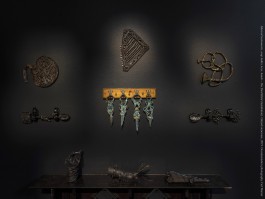 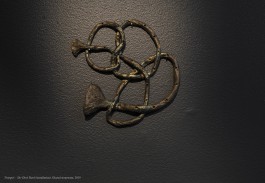 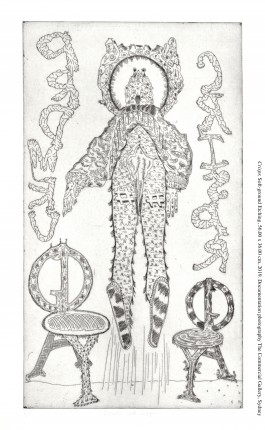 I have often use masters of print such as Hans Baldung Grien to draw from because as a female artist working in the present time, I find some bizarre humour in the fact that I am carrying on this tradition of reproductive printmaking. In this etching, I have reworked the infamous woodcut titled, The Bewitched Groom, 1544 by Baldung Grien. In my translation, the etching mixes my emotional response to current technology, social media and research down dark rabbit holes into uses of the Occult in right-wing groups and current society.

On his thighs are the powerful symbols of the hashtag. The hag is missing from the scene, because the hashtag is her weapon. The hashtag is such an occult symbol.

The Groom is being forced to move, floating away from two chairs that spell G’Day, his head entering a 'vice portal', which looks like a finger ring.

On either side of him are two Sigils, one which I did not invent – CRISPR: Clustered Regularly Interspaced Short Palindromic Repeats. In my mind, this is the greatest spell science has ever made. 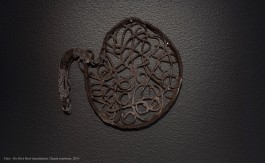 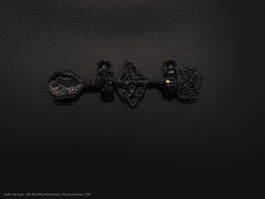 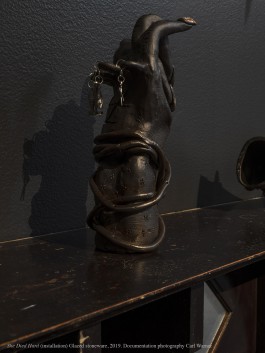 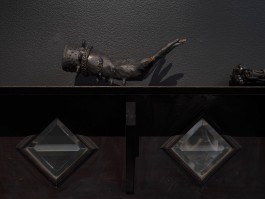 Hands have a Janus-like quality of reflecting experience (hardship) but also foretelling the future. Witches hands are manifestations. Hands are an embodiment for the life lived. They face both ways toward the past and the future. 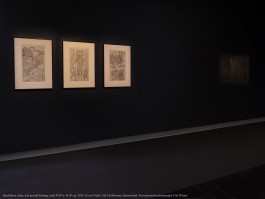 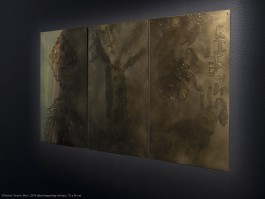 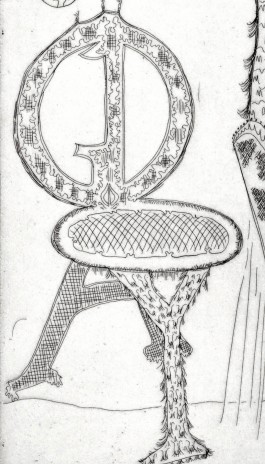 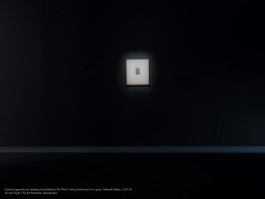