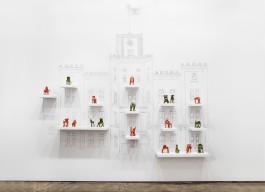 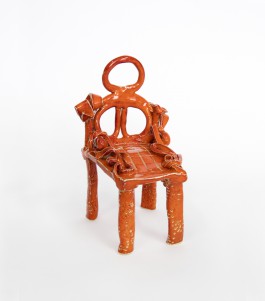 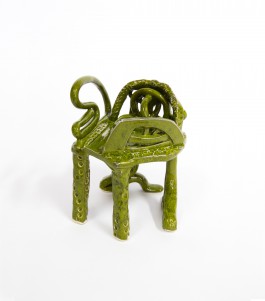 The genesis of this exhibition starts in India, where the artist Emily Hunt travelled and studied for several months in 2016 to learn the craft traditions of the region, and from a small collection of Renaissance engravings from the early period of European reproductive print making.

Traditions of reproductive printmaking are an important part of Emily Hunt’s practice, from Flemish woodcuts to comics, and the series of silk monotypes exhibited here scales up this interest with an intense focus on micro-details.

India, in its rush to embrace a unique, anarchic capitalism, has largely forgotten about its miniature art. Ajay Sharma, a crotchety and demanding painter Hunt studied under in Jaipur, is one of the last masters. In his classes, Hunt was scolded for creativity and pulverized into an obedient and begrudging disciple, much like the gold and lapis lazuli that India painters grind to make their precious pigments. Mr Sharma’s atelier is a forgotten place, swallowed in the chaos of Jaipur, a dusty jumble of slums and crumbling palaces. His workshop barely clings to the surface of modern India; it is in the process of becoming a sedimentary layer of art history. As a pedagogue, this has made him desperate and demanding. The fine details of his art, painted with a single squirrel’s hair, contain the essence of life and death.

The silk for Hunt’s monotypes was sourced at Mangaldas Market in Mumbai, an even more overwhelming place, and from street stalls in Jaipur. It remains unwashed, with its stains and defects. Bright silks are rare in Western settings, but India consumes vast quantities of them. Beggars and maids dress in elaborate silks on occasion. Women selling fans at Delhi street lights can, in the right season, be seen sporting raw silk saris, gold earrings and elaborate torc’s studded with rough cut rubies and diamonds. For Hunt, who has always fixated on ornament and fashion, visiting India was a homecoming, but also an impersonal and overwhelming experience that prompted a focus on minutiae. 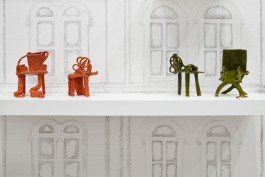 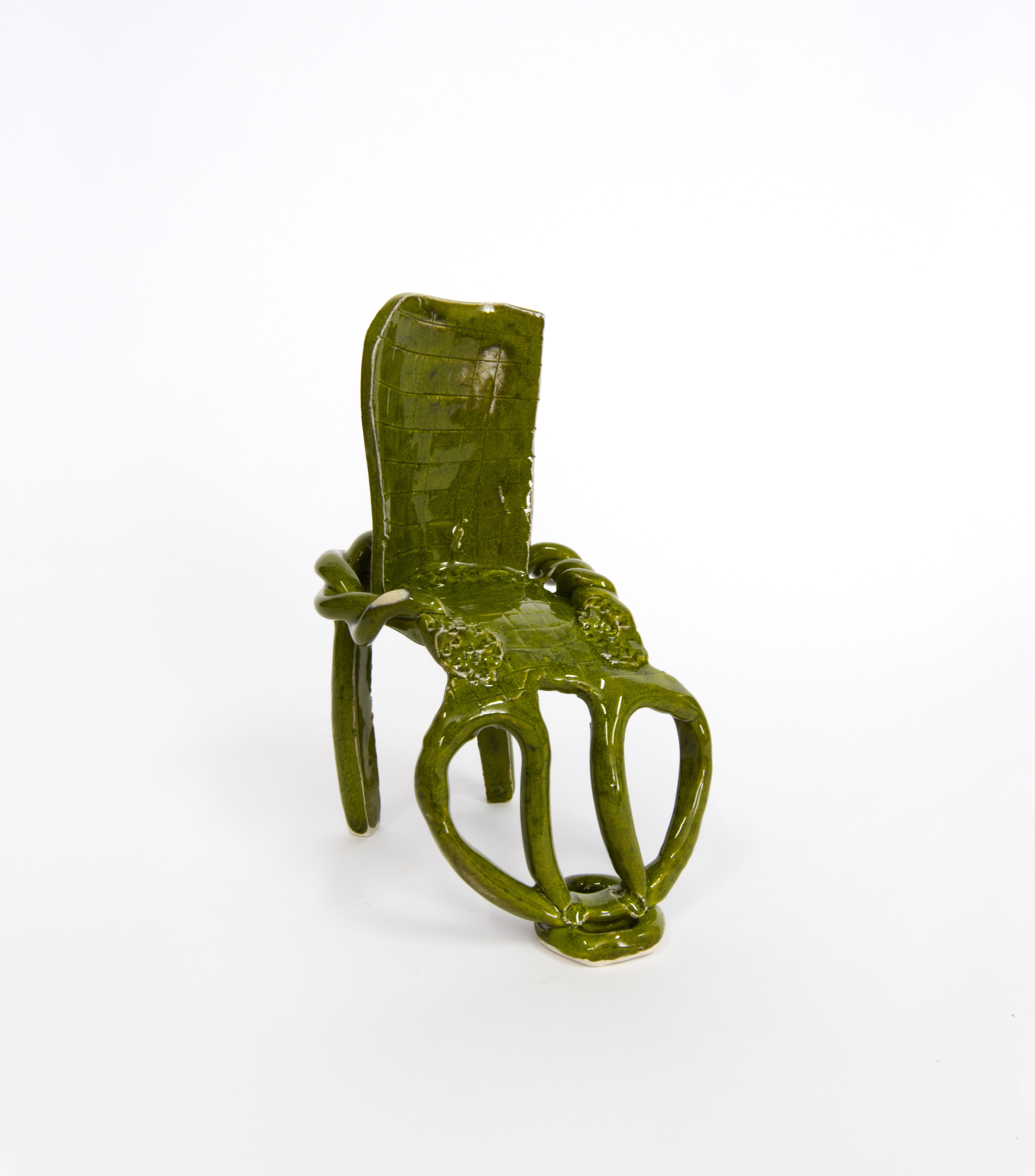 The details in these monotypes, while inspired by Indian experiences, are drawn from Renaissance engravings. One print in particular informs this exhibition, Giorgio Ghisi’s enigmatic The Allegory of Life, which the artist was able to view in Melbourne’s Baillieu Library collection. Ghisi’s impossibly complex mélange of icons and monsters, a puzzle that has never been completely solved, is an intellectual riddle that would likely have challenged and charmed its patron, the Marchesa of Mantua. It bears a relationship to Virgil’s Aeneid, but the immediacy of the image and the mysterious world it conjures up is enough satisfaction on its own. Likewise, the stories behind many Indian paintings are now lost. Howard Hodgkin, whose collection of Indian miniatures is outstanding, claimed to have deliberately avoided learning a thing about Indian iconography, so his instinct could grow attuned to authentic and original works as he sifted through thousands of pictures in old palace folios.

Reproductive printmaking has long been an effective medium to establish the potency of certain symbols and circulate prestige. Indian miniature painting, which is traditionally the product of ateliers rather than individual artists, is close to printmaking despite not using a printing press, and for centuries has churned out regularized copies of popular mythologies and court scenes.

Most famously, the enigmatic self-portrait of master miniaturist Farrukh Beg (c. 1545 – c. 1615) a loose copy of an image created by Marten de Vos (1532 - 1603), transfigures a melancholy European scene, in which an old man close to death watches a cat lap spilt milk, into something psychedelic, expansive and flushed with reincarnation.

Hunt’s art practice is heavily influenced by architecture and interiors, and building together the skills and materials she collected over her journey across India, she retreated to Germany to the Schloss Balmoral castle, in Bad Ems, a geographic pun that encouraged her to closet her worst impulses. 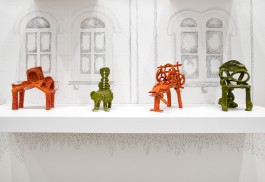 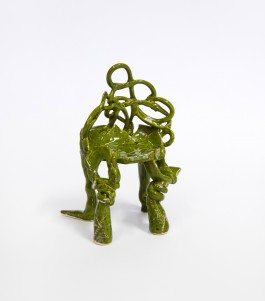 The process of making a monotype is physical and unforgiving. A plastic substrate is inked, scraped, and then printed onto silk, which takes on the imprint of the printing table with its unevenness and remaining production traces. Each portrait was drawn from Ghisi’s engravings, pulled from a pile of photocopies in the studio that the artist would glance at while scraping back the ink. With a monotype, unlike an edition process, there is only one chance to print.

These monotypes are also an act of proportion. The gesture is quick – an imprint, an impression – admitting an intense but short engagement with the totemic forces of Ghisi’s reproductive art, which, like rich food or mannered speech, can be disgusting in large doses. These effervescence forms are also an antidote to the crass reproductions of decorative figurations that sell uninteresting objects and add heft to nasty ideologies. Hunt’s monotypes reclaim the toil and burden of the copyist and craftsman, the decorator and the print maker, from the clutches of bad resorts. They re-establish a world that is more snobbish and unforgiving, where the totems mean what they say and access to them is forbidden to those who do not submit to the rules based order, to workplace etiquette, and the charms of silence.

Brooding before these banners [in a large pencil wall drawing of Schloss Balmoral in which Hunt currently resides is a collection of stoneware chairs glazed with Ebinger-Schnass glazes, the famous Bad Ems-ian ceramics company which, in its heyday, produced glazes for the Austrian artist, Friedensreich Hundertwasser (1928 – 2000)]. The chairs extend the luxurious and devoted ornamentation of engravings and miniatures into the world of touch, place and the home. These follies are fragile and impractical, combining the focus and dedication of the copyist with an awkward and improvised design. They are needy, failed objects, cul-de-sacs where the fruits of combined experience -- decorative scroll work, cross-hatching, and curlicues -- melt away into liminal sensations of pleasure, mystery and dread. They are the temptation as well as the putrefaction of a mental retreat into beauty. These chairs cannot be physically sat in, nor should the spirit try and replenish itself from resting on them, but there is a place for them somewhere and they could partly inhabit almost any home.

The exhibition space is an invented domestic space – playing with scale to demand squinting and rubbernecking. The monotypes are wrenched out from the fine details of puzzling and dizzying engravings. Intimate details have become impersonal, imposing. The chairs condense the grandeur of sprawling day beds and elaborate Pompeian armchairs into curios. Objects that are usually comfortable are now hard and dazzling.

The room unravels the intent of reproductive printmaking, which has traditionally taken frescos and architecture as its subject and transmitted their grandeur into foreign courts and workshops.

This space is a self-portrait. It hints at the slender possibilities for creative expression in a world of multi-layered facsimiles, where agency is under question and originality is a vanity, but where the sensation of renewal and revelation can still be teased out through instinct. Where the real thing can sit right before you. 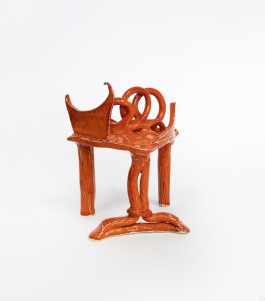 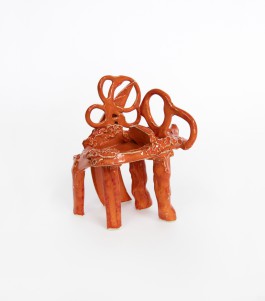 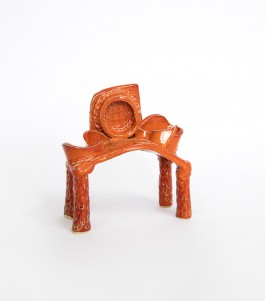 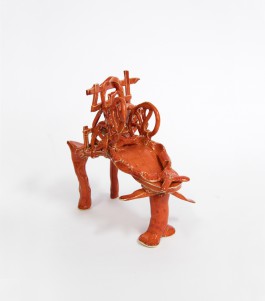 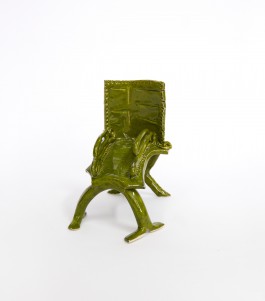 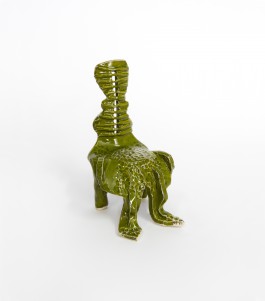 What makes a chair a chair? Legs, a base, a back? How abstract can a chair become before it’s completely unrecognisable – before it turns into a creature or a sculpture or a hatstand?

I remember walking through a room – I’m pretty sure it was at the National Gallery of Victoria, or maybe the National Gallery of Australia – where a whole history of chairs had been set up, maze-like, in a large space. These objects pushed the parameters of the chair: four legs, three legs, no legs; enormous and tiny, like those computers that can fill a whole room versus the ones that fit easily into your palm. There were diagonal planes of wood carving out space, there were perforations and strange materials, some of them echoed human bodies and others were utterly alien.

For her new show Bad Ems at The Commercial, Emily Hunt has made nineteen stoneware chairs. They are small (you could hold them, only just, in your hand) and displayed on white shelves. Some of the shelves are above (my) eye height, which introduces an odd paradox. The scale of the chairs should make me feel comparatively enormous, but the shelves make me feel like a kid trying to look over a counter. It’s a bit annoying, not being able to see the high-up chairs properly, but I figure it must be deliberate: when you’re shorter than something – or someone – you’re forced into a position of supplication. But you can also see those above you from their least-flattering perspective. You are privy to their double chins. You can see up their skirts. One of Hunt’s chairs has a kind of skirt – a clay frill around its legs. The glaze is patchy and unfinished on some of the undersides.

The chairs themselves are gorgeous, but not in a straightforward way. They are grotesque and baroque: ribbons of clay writhe and coil to create elaborate armrests. The high-gloss glaze, in forest green or red-orange, pools in crystalline cracks where the clay has been affixed to itself with neat dents. Some legs are thin and angular; another is rounded and lumpy, curling into the shape of a turd. One kind of stumpy chaise longue is endowed with six log-like legs.

Some chairs are borderline kinky, as if the coils and whorls might strap you in. I think of thrones, and the electric chair. If chairs are symbols of power, Hunt’s are extravagant and impractical: a parade of misfits staking a very serious claim to the irrational.

Facing the chairs are three monoprints on silk. Each one has a hidden backing, a neon-bright silk that feels like a reward for my nosy close-looking. These backings reflect onto the wall, pink and shocking, but kind of secret. The monoprints themselves are small images in the centre of large banners, and the imagery is classical-looking: ancient portraits carved into ink. The silk is delicate and heavy, and when suspended from brass rods, the banners round out into their lower seams. These rods rest between hand-made ceramic brackets, and it’s these elaborate fixtures that distinguish the prints as objects rather than images. They jut out from the wall, providing distance so that the fabric billows, taking up space. Hunt has worked with both ceramics and printmaking for years – initially trained in the latter – and tends to find unexpected ways to combine the two. In the banner works, clay plays a supporting role.

A grand château is drawn directly, in lead pencil, onto the wall behind the chairs. The drawing is called ‘Slosh Balmoral’ (2017) and I imagine this is how Hunt’s daughter might refer to the institution where Hunt has been in residence this year. Künstlerhaus Schloss Balmoral, in a German spa town called Bad Ems. Ha. The château façade has a lot of windows, and the perspective is all off: at its highest point, it’s drawn as if you’re looking down onto the roof. It is an architectural folly, fit to house unreasonable chairs. 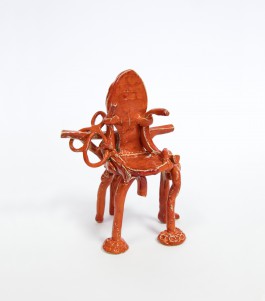 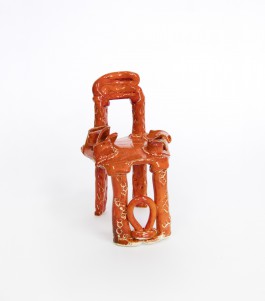 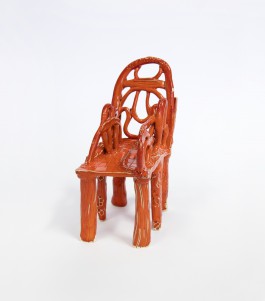 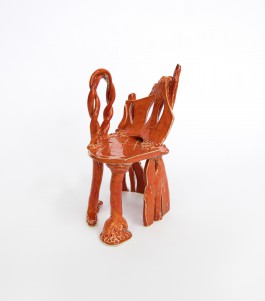 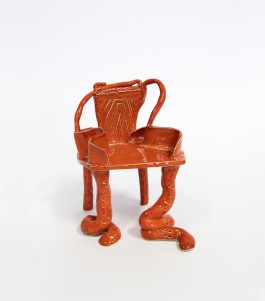 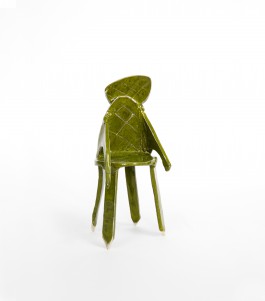 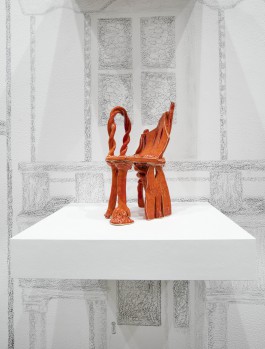 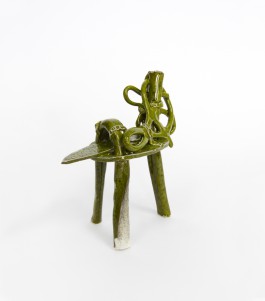 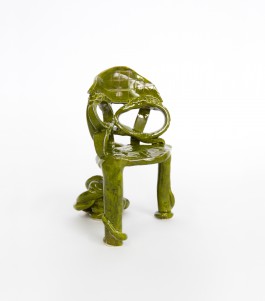 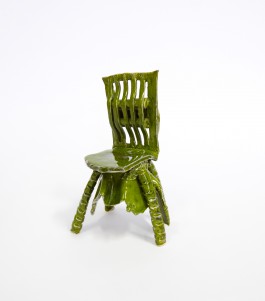 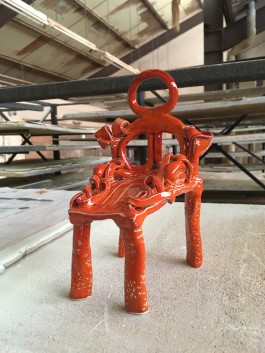 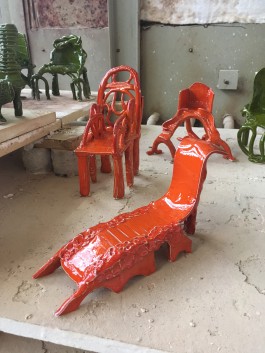 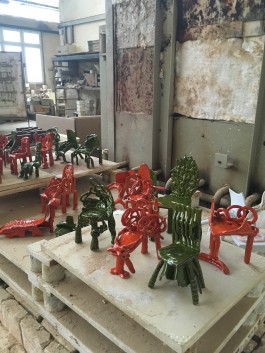 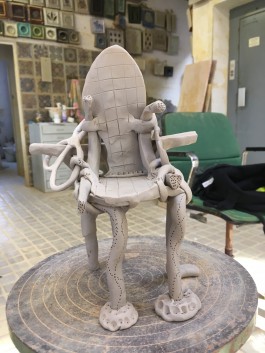 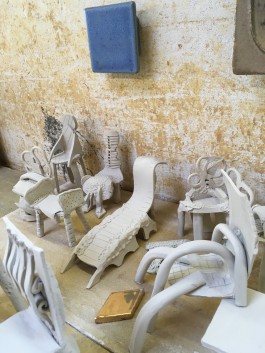 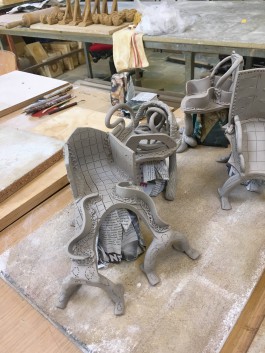