The title of this exhibition is a quotation from Erik Davis's incredible book High Weirdness (2019). Although I have been working through the lens of Philip K. Dick's "pink beam" moment for some time, his book truly formulates the notion of the weird and is kind of perfect in every way. Davis is such articulate thinker, talker, and loose goose. Thank you Erik Davis for your amazing podcast too.

A frequent reference throughout all my work folds back to two media events that occurred between the ages of 18 to 21 years old. The first was watching short film by Charles and Ray Eames called the Powers of Ten (1977) while I was stoned, at IMAX theatre. The second event was a reading an infectious comic by Robert Crumb, called The Religious Experience of Philip K. Dick. In 1974, a beam of information was transmitted to Phillip K. Dick over an eight-hour period. This invading force took many names, one is the cosmic database he sometimes called VALIS which stands for Vast Active Living Intelligence System.

The Powers of Ten short film collapsed the micro and macro scales into one level. This plays out in a peculiar visual language throughout my art practice. Obsessive pattern is one way to depict this collapse. In the work created for High Weirdness, it is visible in a painted table, that sits inside a table, that displays many smaller tables. Worlds within worlds. The large table is ornamental, drippy and wonky. It has been painted with the visual nota from a grimoire – a book of instructions in the use of magic, especially one containing spells to summon or invoke supernatural entities such as angels, spirits, deities, and demons. The drawings on the table are copied from a grimoire known as the Ars Notoria. The manuscript is dated from 1225 A.D and it is kept in the Beinecke Rare Book and Manuscript Library at Yale University. It was used to aid in the rapid learning of subjects such as grammar, rhetoric, music, philosophy, geometry and theology. Through prayers and studying the drawings, one can rapidly learn these subjects, through summoning angels. One must study the drawings to be transmitted the information. This links back to VALIS.

When I locate a new area of fascination or research, I must make art about it, so as to understand more, to unfold it. The installation is ceremonial, using the technology of high magic so I can rapidly learn about the religion of Gnosticism.

I use the ceramic figurine as a learning tool – the making of which involves an ‘alien voice’, because some other entity joins in on the creation. In surrealist techniques, the concept of automatism only touches painting, drawing or writing, however, I feel there is a vacuum of conversation around automatism in clay-making. The clay often leads the way, to what it wants to become. It is absolute High Weirdness when this happens.

The notion of an eerie animation (another of Davis's concept) appears throughout the figurines, like a puppet, the figures are embodied with animist life, living in a world that is not part of death or life, but somewhere in-between the veils. The figures of small female witches reference older, forgotten women in society who have secret immense power. 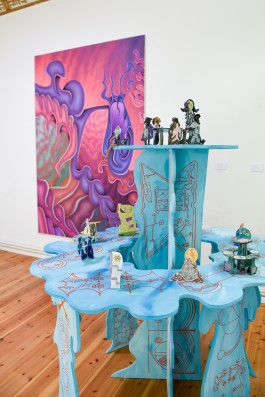 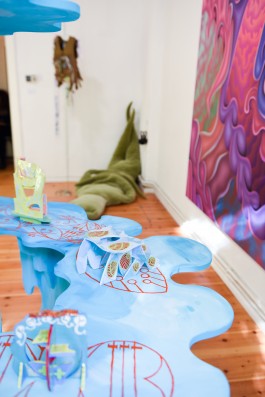 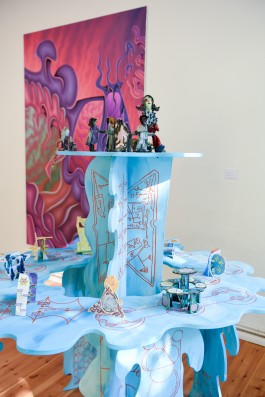 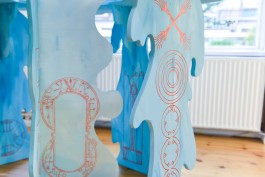 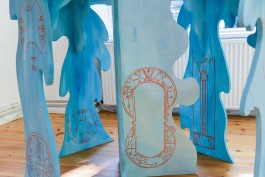 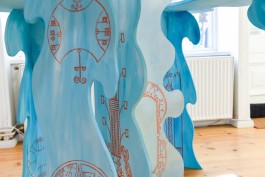 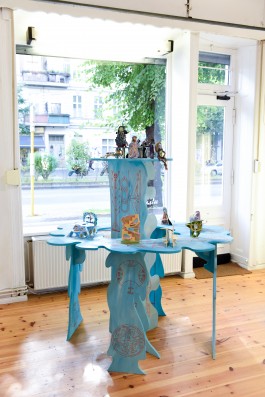 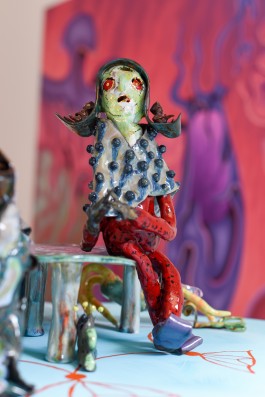 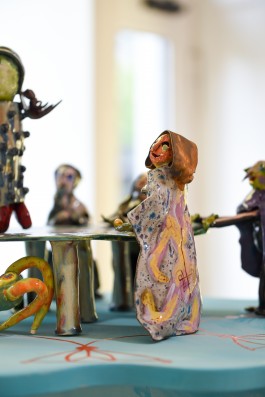 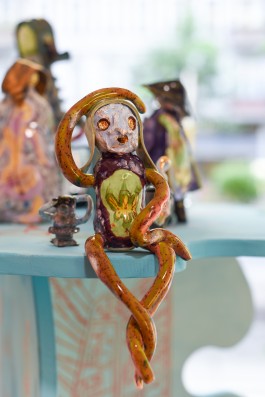 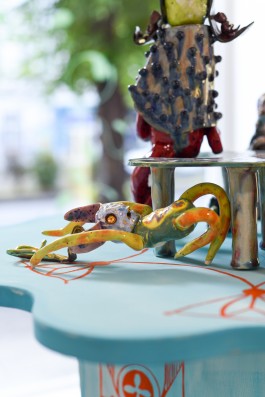 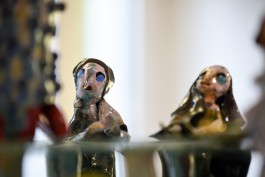 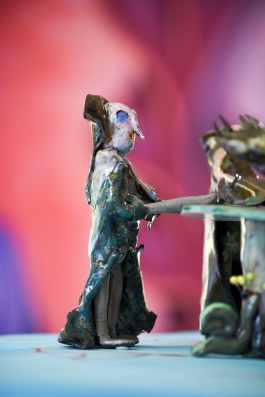 When we consider something to be weird it’s usually a thing we can’t explain, a thing we don’t understand. Weird is unsettling, can be horrifying, but also fascinating. ‘High Weirdness’ deals with the feeling of ‘weird’ interpreted by three different artistic perspectives.

Antonia Freisburger’s paintings remind me of the tempting smoothness and pastel colours of impossibly chewy candies. At the same time I’m terrified of being submerged in their sticky surface which seems to exist in a dimension incomprehensible to human minds. Antonia’s paintings make you loose the sense of time and scale, they conjure feelings like those of cosmic horror- a slip of the mind and suddenly you’re aware and terrified of things that are way beyond your understanding and control. Standing in front of her vast canvases you might get the feeling of being sucked into a strange universe of pulsating colours, of glowing and expanding shapes that are difficult to define with words, as though they don’t belong to earthly vocabulary. They have a sort of viscos- ity that makes makes you feel like you stuck in there and similarly to escaping the quicksand–the more you try to move the more you become trapped. Antonia’s work makes me think of the idea of ‘Hyperobjects’- a term coined by Timothy Morton to describe entities such as environmental threats (for example radioactivity, global warming, styrofoam but also capitalism) with the impact so massively expanded in time or space, that it can’t be fully grasped by an individual.

The vastness and incomprehensibility of things has been known to instill in us humans the deep desire to do- mesticate and control. Emily Hunt’s miniatures of familiar objects, architectural elements, repeated in different scales trigger in me a vertigo of the mind. As with Antonia Freisburger’s work, questions about the relation between scale and an individual’s control, seem to be at the core. In Nota Flashback Tableau Vivant (2022) small figurines, each with their role and character, are part of a mise-en-scène, where they’re sitting in a circle and I wonder if they’re discussing the matters of the universe? Or casting spells? Or maybe they’re just lifeless corpses, waiting to be resurrected?

The notion of an eerie animation appears throughout the whole work– intricate ornaments slither on the drippy table, the crooked miniature displays look as though they could start to dance at any moment and the figurines, like puppets embodied with animist life, seem to live in a world that is not part of death or life, but somewhere in-between. For Emily the act of creating is the practice of understanding. Her interest in books, reading and writing manifests itself in complex nested stories, translated into ceramic protagonists and the scenes she stages.

Rosanna Graf also works with characters but in a different manner. The characters created by Rosanna are explorers of states of mind– they’re unorthodox psychologists of sorts, wandering through the weirdness of the human psyche. In ‘High Weirdness’ we see the bodiless costumes of Sabina and Toni - protagonists of Rosanna’s video work ‘Cellar Door ‘(2022), that are directly linked to the founding mothers of modern psychoanalysis, Sabina Spielrein and Toni Wolff. The hanging vests Psychoactive Ghost Hunting Attire (Sabina + Toni) (2022) are equipped with a variety of tools, magical objects and keys to non-existing doors. Ghosts in Rosanna Graf’s work stand for things that haunt our presence, repressed parts of our collective unconscious. Toni and Sabina, who (in real life) became ghosts of the past themselves, as they were eclipsed by the male psychoanalysis can- on*, reappear in ‘High Weirdness’ as voices in the audio piece Schizo Baby Babble (piece made in collaboration with Paulina Nolte, 2022). As psychoanalysts-adventurers, they conduct research on the inside of a patient’s brain. Haunted by the patient’s ego, neuroses and other oddities of the mind they enter a realm of psychedelic ecstasy. The magic blends into realism with the presence of a psychologist’s couch; in ‘High Weirdness’ this is a gigantic velvet mandrake (Exercising Restraint, 2020) – a figure reoccurring in Rosanna’s work. When ingest- ed, this plant served as a gateway to other worlds whilst its supernatural scream was considered deadly. As a gatekeeper and protector, it wraps the listener in a warm and softly enveloping shell to create the perfect base for a deep psychological journey.

The encounter with weirdness can be uneasy but in this unease lies the possibility of hightened experience. From things beyond our understanding to those nestled deep in our consciousness, weirdness is constantly lurking, waiting to cross the thin threshold between the eerie and the familiar.

Antonia Freisburger aims to leave her own reality and enter a realm of existence that is definitive and calming. By following self invented, strict rules of painting, she reaches a deep sense of timeless origin, a state of clarity that humanity is denied in its corporeal form. Freisburger’s paintings invite you to visit a zone that is everywhere and nowhere, where laws of nature are boundless: a place that doesn’t have just one truth. Freisburger’s work is inspired by of classic science fiction, which she views as more than simply entertaining, and necessary way of contemplating humanity’s development over time. Without directly quoting and reproducing specific elements of this field, her paintings are positioned in an anti-materialistic world, something that is desperately needed in this capitalist reality we live in today, and creates hope for the future to come.

Emily Hunt creates ornamental, figurative ceramics. She has a deep interest in the earliest representations of female witches in German Renaissance print culture. This archetype of the crone surfaces frequently throughout her practice. Hunt turns our attention to the marginalised older woman as a figure for redemp- tion. Her work seeks to acknowledge the invisible women in society. Her witches contain a hallucinogen visionary position. Her current projects synthesis three main ideas; the theory of panpsychism, walking as a magical tool and the (possible) transformative effect of public art.

Rosanna Graf’s artistic practice is based on an intensive occupation with myths, psychoanalysis, the magical and the abysmal. For her works she examines diverse pictorial material – historical, mythological, ethnological or pop-cultural – for iconographic impulses and cross-connections. In interactive performances, installations, texts and cinematic works, Graf places projection figures at the center. Vampires, witches, stewardesses and ghost hunters enter the screen and are given the possibility of self-empowerment through the means of language and self-expression.

* Sabina Spielrein and Toni Wolff were prominent psychoanalytic, doctor and psychologist. Unfortunately in the history dominated and written by white male protagonists, the memory about them was brought down to being remembered just as Jung’s lovers and their contributions were almost forgotten after their deaths. 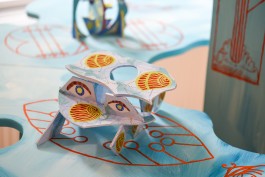 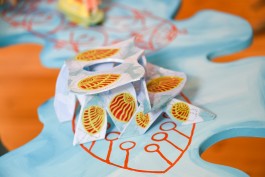 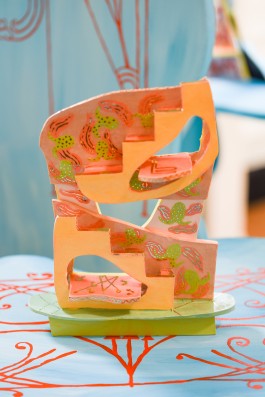 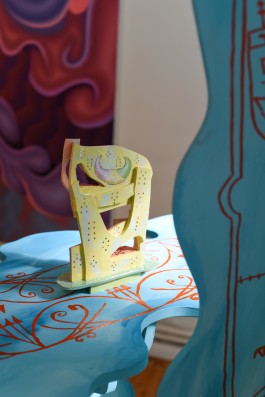 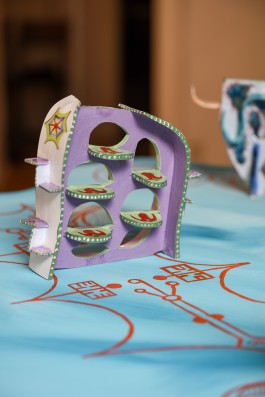 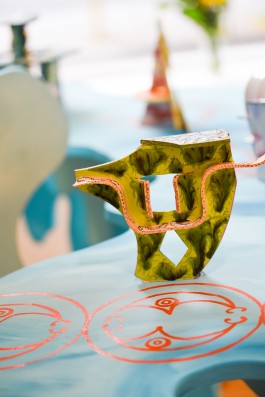 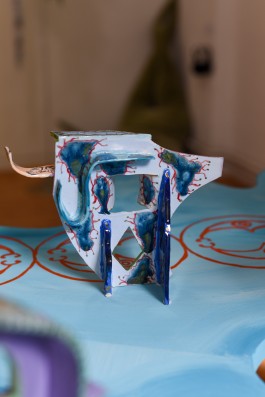 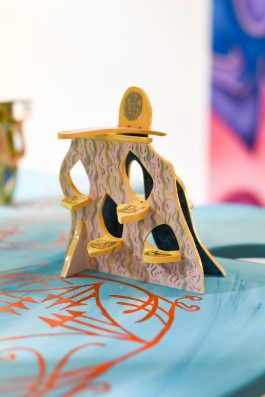 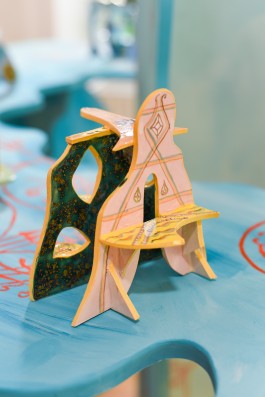 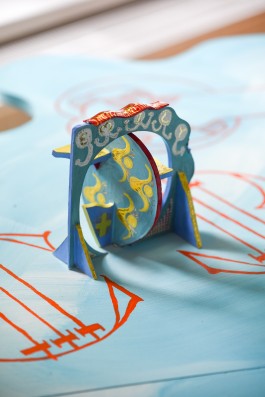 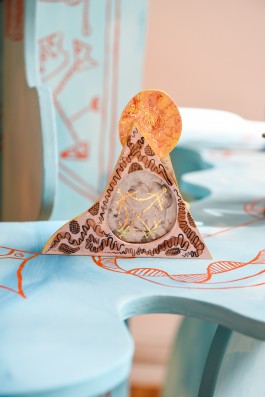 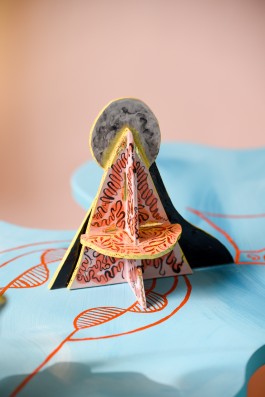 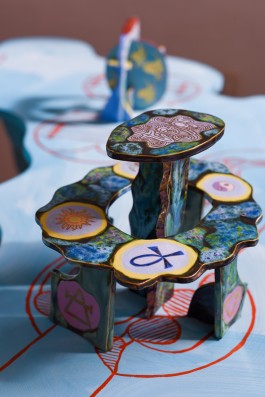